Hollywood once again gives us a remake of a movie already made that released in 1990. The original cast comprised of one of my favorite female actresses’ Julia Roberts. Needless to say, I had no real expectations when i embarked once again to trust a new cast to bring me back to life. Oh, had i wished for the Evanescence song to be cordially invited onto this soundtrack for the perfect union but, no such luck in this hospital.

We do get reunited with a doctor who embarked on a similar journey a few decades ago in medical school. Kiefer Sutherland returned as the hard ass professor who is keen enough to know something might be going on with his students but, just can’t pry it out of their notebooks.  A line made by Sutherland when a student doesn’t come up with the answer and needs to frantically check her notes. His role isn’t substantial but, his presence is felt in more then one scene so kudos for the one cast member who was brave enough to get resusciated.

I am here to make a confession. as rare as it may happen… I actually preferred this version to the afterlife that paved the way. Ellen Paige ( Courtney ) , Diego Luna ( Ray ) , Nina Dobrev ( Marlo ) , James Norton ( Jamie) and  Kiersey Clemons ( Sophia ) all bring powerful performances to the operating room even, if they have to sneak around killing each other temporarily, to excel in their newfound appreciation that death may bring. I mean you may have special abilities and, remember old recipes and how to play the piano after a decade but, the side effects may include well, spoiler do include ghosts and your heinous of sins haunting you.

Some character developments stayed the same but, others were changed and brought more intensity to the creepy urgency to rid themselves of their guilt. Must I also point out that more female doctors in the making were formed in this version – only difference is some of these gals are afraid of these ghosts!! Courtney, who thinks shes the first one to attempt such a ludicrous journey becomes, haunted by her younger sister whom she was driving when an accident occurred that took the car careening into a body of water drowning the younger sibling. 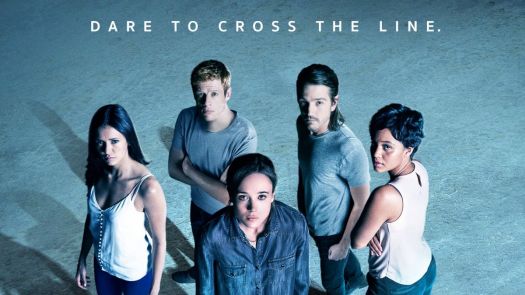 Jamie is having problems keeping his pants on just like William Baldwin’s character did in the previous film. Sophia is under heavy arm guard practically by a domineering mom.  We find her past guilt in the form of social media harassment. Marlo might be the trophy winner in her recent cover-up concerning switching an autopsy report ,after not sleeping. Ray is not fighting the dark force in this film the way he did in Star Wars but, he is fighting his fellow students into thinking about the consequences of thier actions . Nonetheless he is very much needed as it’s evident more bodies would be in bags had it not been for his fast hands and smart thinking.

The ultimate game changer comes in the form of one of these characters actually dying, I haven’t partaken of the previous film in quite some time but, if my memory serves me correct a main character didn’t meet it’s maker. You’ll have to comment below if I’m wrong because I can’t always be right! 🙂

This film with the technology now made readily available if your pockets can avoid the budget that is, make for a more stunning visual embarkment into the daze of white lights and incubation.

“Hail to the king, baby!” Click the image to get yours 😈
When you open the oven to check on your pizza...🔥🔥🔥🔥 . . . . . #weekend #freddykrueger #fire #pizza
Kick some #Deadite ass with these #groovy sneakers! They come in men’s and women’s sizes with FREE SHIPPING. These run a little small so order a size up! 😈
Have you watched the “gore cut” of Tammy and the T-Rex? If not, do yourself a solid and watch this gem on @shudder. Our fav evil slayer @science_broe did and thought it was killer! 😈
Follow Scary Basement Media on WordPress.com
%d bloggers like this: