For nine years, Kenny Caperton has thrown a huge Halloween Bash on his property in Hillsborough, North Carolina. This is not ordinary Halloween party though. Kenny loves Halloween and the movie franchise so much he decided to build an exact replica of the old spook house itself, the Myers place as his personal residence. I couldn’t think of a better place to have an epic Halloween party so Scary Basement Media had to experience this celebration in its ninth year. In 2008 he began construction and by 2009 his dream house was completed.

“Owner Kenny Caperton has been fascinated with all things Halloween since childhood, and grew up watching 80s slasher flicks on late night cable television, but the blank pale face of serial killer Michael Myers stuck with him the most.  Kenny’s favorite film is still the original HALLOWEEN from 1978.  In 2008, at the age of 26, he reached a point in his life where he was ready to find a place of his own and stop paying rent.  During the process of house hunting, he just so happened to plan a vacation to Los Angeles, California, which included a mandatory pilgrimage to visit the original Myers House in South Pasadena (yes, it’s still standing!).  As a lifelong fan of the HALLOWEEN series, seeing this infamous house in all its sinister glory at this moment in time gave Kenny an insane idea… thus, the creation of The Myers House NC!  So what could have been just another cookie cutter starter home became a life-sized homage to a classic horror movie.” – The Myers House NC website.

The party included a triple feature of classic horror films including Halloween 4, Halloween 5, and My Bloody Valentine. One of the big features of the party this year was that Kenny had Peter Cowper, Harry Warden/The Miner himself, from My Bloody Valentine. Mr. Cowper was an unbelievably nice guy who signed autographs including on pick axes, taking fan photos, and having a Q & A for the party goers that let us in on some of the behind the scenes antics on set of the classic horror film.

While not neccesary, some awesome party goers wore their costumes to the event. We graced our eyes on numerous Myers’ (including a couple that were part of the event), a few different Voorhees, and even a the epic painter himself, Bob Ross! Other festivities included raffles prizes, the deliciousness food truck Bull City Street Food, and a tour of inside The Myers House NC itself. Kenny has acquired enough horror merchandise to make any collector envious. If you think you have a great collection, wait to you see his. From hard to find movie posters to vintage halloween costumes, Kenny is the horror king of North Carolina. 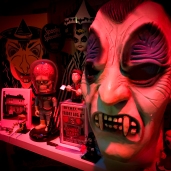 We plan on attending again next year and HIGHLY recommend you join us for the spooky and ghoulish event! Check out the links below to find out more for yourself and connect to the spook house! We will be showcasing a short video featurette so stay tuned! Also, CLICK HERE to see all of our pictures from the party including fantastic horror cosplays and more from inside the house!

Doing a little light reading on what could’ve been. It’s been out for over a decade but have you read this storyline? 😈 . . #freddyvsjasonvsash #freddykrueger #jasonvoorhees #ashwilliams
Need to take down some #GROOVY notes? This 118 page notebook can handle it. Don’t forget, take 20% off all Hail to the Chainsaw merch with promo code DEADITE! 😈 . . . #evildead2 #deadite #horrormovies #hailtothechainsaw
I am continuously impressed with this series of @officialgarbagepailkids! Loving this Creepshow. 😈
Our store is back and thank you for your patience! Since you had to wait, take 20% off any Hail to the Chainsaw item. Just use promo code DEADITE at checkout 😈🤘
Follow Scary Basement Media on WordPress.com
%d bloggers like this: