It’s beginning to look alot like Christmas.. ah crap.does Halloween have to leave us so soon? As stores rush the holidays upon us Craig Anderson unleashes a gift of a horror you’ll want to open now. Some movies can show the Hallmark channel it’s not all love & romance. Don’t forget how important it is to spread gore among your family members that live for the bloody feasts.

Horror hounds may be attracted to this one because it stars Dee Wallace. Any true horror fan needs no introduction to this iconic actress. She also helped pen this script so if you love her your bound and tied under the mistletoes to gorge on this dysfunctional holiday gathering.

Dee plays Diane mother hen to her family who are visiting her for the last Christmas in the home they grew up in. She made a pact with her now deceased husband that at 65 they would travel. Family dynamics make the first half of this film uncomfortable.

Everyone seems so different from each other and bickering is running amuck. So is some pre birthing sex with a priest playing the role of vouyeur. If that didn’t make you feel right at home, then welcoming in a fully cloaked stranger with his head fully wrapped and, smelling like urine may win for best fruit cake at this holiday gathering! He has a letter he’s dying to read to this seemingly lost crowd of participants. Theres one person who figures out pretty quickly who he is and, makes it quite known he’s no longer welcome. 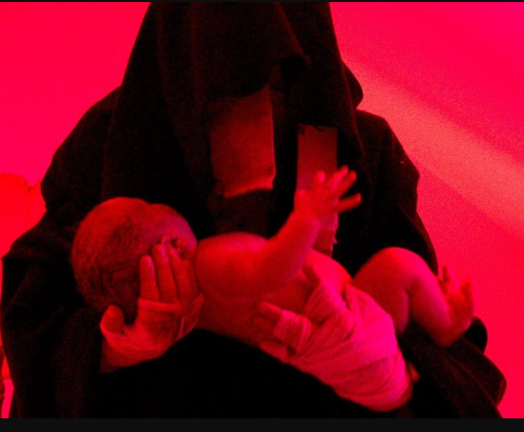 Secrets don’t last too long and, neither do family members who keep stupidly running off alone more susceptible to the man that makes Darth Vader look like Santa Claus.

There are some cool death scenes but, be forewarned alot are quick camera cuts.. There was one in particular that was pretty tense .

I won’t spoil the unveiling behind the face of anger but, it’s somewhat justified. Family… you can’t live with them you can’t kill them or, can you?

When that #happyhour starts hittin’😈 . . . #evildead2 #brucecampbell #groovy
Jason is a Deadite confirmed 😈
Check out our EXCLUSIVE “Peek-a-boo” Hail to the Chainsaw fleece blanket. Get cozy with your inner Deadite or Ash. Only two more days to take advantage of 20% off with promo code DEADITE. 😈
I miss @visitsleepyhollow 😈🎃🐴 . . . . . #sleepyhollow #newyork #movie #cartoon #horse #october #halloween #horrorfan #horrorlove #pumpkin fall #jackolantern
Follow Scary Basement Media on WordPress.com
%d bloggers like this: