Rocky Horror Picture Show from the very beginning was fascinating to me, not only was it a musical which I love, but it was horror and it was fun and starred some great actors and actresses and one of my favorites Meatloaf. So of course from the very beginning I was like YES! There are so many aspects to this movie that make it great that its hard to just pick one but I am going to try my best to discuss each and every one in slight detail.

|Explaining the storyline of Rocky Horror Picture seems simple till you try… then you find yourself veering off into the line of the criminologist and trying to explain the small details so that the plot makes sense.Which you then realize it doesn’t, hardly at all. We are introduced Brad and Janet, who are played by Susan Sarandon and Barry Bostwick. 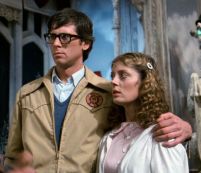 So after getting engaged at their friends wedding they decide to hop in their car and go visit one of their old friends Dr. Scott. And of course low and behold its storming while driving and surprise! From there on its a…. strange journey for sure. Brad remembers a huge mansion down the road so they both decide to go and check it out and see if there is a phone so they can call a tow truck. So off they go to the infamous castle. Of course go figure what they come across is much, much more than they expected. From then on, its a whirlwind of music, introducing more characters such as Riff Raff who is played by the writer of the film, Richard Obrien, Magenta who is played by Patricia Quinn and Columbia who is played by Little Nell. All the while teaching us how to time warp and how to give yourself over to absolute pleasure. Then…comes the big reveal, the one I was shocked to see and honestly I was like “What in the …..”. But my god as usual Tim Curry SLAYS it!!

Everything about Rocky Horror shocked me at the time, and the more I read into it and the more I researched it the more I began to appreciate the art behind it. Richard O’Brien’s pure genius in making such a controversial film in the seventies. The outlandish portrayal of Transylvanian aliens from Tran-sexual Transylvania. Then my absolute glee when I found out it was a stage theater play. Well now I had a new goal in life. I was so confused yet, entranced and I wanted to watch it over and over and over again. So I did, at least four times a week I would have Time Warp playing and singing along. I adored the Frankenstein-esque storyline of a mad scientist obsessed with making the perfect man that would get “Charles Atlas’s Seal of Approval”. The psychedelic medium with all the costumes and insanity of the horror/musical/ comedy/, honestly it blew my mind and I loved it.

To me Rocky Horror shaped my love for musicals and the strange even more. It brought the strange in me to the point where I would find myself fascinated with Richard O’Brien’s vision and the man himself. This film is definitely one of those guilty pleasures that I found out has a huge cult following. Its horror its comedy, its a musical and it is absolutely great and I will love it to the end of the time.

So in this Science fiction double feature, lets enjoy what it is. Years and years of absolute pleasure and a strange and entrancing movie. So lets do the Time Warp Again and again.